There's been another tragic incident in the city involving the carriage industry, with a horse clipped by a bus, spooked, ejecting the driver, and a runaway carriage with a terrified passenger.

We're marching on August 7th at Noon to protest this dangerous and antiquated tourist trap, we hope you will meet with us at Sarah's Place, where we'll march down Wharf to Belleville and Menzies where the carriages are, and continue the protest there until 2pm - join us any time.

There has been a lot in the media, and CTV has done an excellent job covering the issue, here is their initial report:

Here is their second report, and exclusive interview with the passenger, as she explains how she feared for her life:

Lots more coverage, including the Victoria News (accepts comments via Facebook), Times Colonist, and CBC (also accepts comments). Sarah Kramer also has a great blog entry on this, and you can sign our petition to ban the carriages at Sarah's Place in Market Square (above Green Cuisine.)

Below is our media release for the event, thank you for speaking up for these horses! Join our Carriage-Free Victoria page on Facebook as well: https://www.facebook.com/pages/Carriage-Free-Victoria/142240729127464 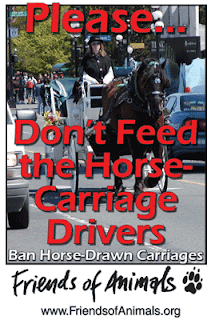 Victorians March for a Carriage-Free Victoria
It’s 2012: time for this antiquated and dangerous industry to be put down.

The nightmare experience of a Victoria tourist, fearing for her life in a runaway horse-drawn carriage in downtown traffic further emphasizes the point Friends of Animals has been making for decades, and in the city for the last six years: horses don’t belong in the city.

This is the third reported incident in the last month. The Times Colonist featured an overturned carriage in mid-July, we were informed of another incident around 4pm on July 23rd in James Bay at Simcoe & Douglas, and then this harrowing tale from Wednesday, after a tour bus clipped Sarge, a carriage horse, spooking him, which ejected the driver and resulted in an uncontrolled carriage bolting down the street with two passengers on board. One jumped from the moving carriage, and the other wondering if she’ll even survive.

Horses are flight animals; 50 million years of evolution developing this response to threats has not been undone in a few thousand years of domestication.

“Every moment they’re on the street,” continues Shishkoff, “they’re one loud noise, one errant dog or careless driver from something like this happening. It’s unfair to put horses through this experience, endangering them and the people in the downtown area.”

“James Bay is being held hostage to these tourist contrivances.” wrote in a concerned James Bay resident, upset with horses being treated this way, and the impact on the community.

“We need to find them a sanctuary where they can live out the rest of their lives with dignity.” says Sarah Kramer, co-organizer of the march. “These horses do not belong on the streets of Victoria and we must be moved to action to push Victoria’s City Hall to ban these carriages from the downtown streets.”

We can imagine a much better life for these horses, let’s make it a reality and improve Victoria in the process.

Friends of Animals and Sarah Kramer are rallying horse advocates at Noon on Tuesday, August 7th, meeting at Sarah’s Place - 560 Johnson Street (in Market Square - above Green Cuisine), will be marching down Wharf Street to ‘Carriage Corners’ at Belleville and Menzies, where the protest will continue, distributing literature and adding to the 2500 petition signatures already collected.

Email ThisBlogThis!Share to TwitterShare to FacebookShare to Pinterest
Labels: carriages