The Alley Cat Allies has published an interesting document called The Vacuum Effect: Why Catch And Kill Doesn’t Work (read the PDF here: http://www.alleycat.org/NetCommunity/Document.Doc?id=534 ) researching the efficacy of kill or ‘cull’ programs, mainly in relation to feral cat populations. It’s no surprise to learn that the elements that drew cats to the area will only continue to do so, even when the community is destroyed. Same with other species in other environments, like mountain lions, badgers, raccoons and others.

Doubtless, more rabbits will turn up at UVic. They are currently living off-campus in the surrounding neighborhoods, and other wooded areas. Inevitably, they will also find their way to UVic. And, unfortunately, UVic’s response (at least for now) is to kill them.

We can understand that UVic doesn’t want people abandoning pet rabbits on campus grounds - we really sympathize with UVic, and the rabbits themselves. This isn’t an ideal location for a domestic rabbit. But as we’ve stated repeatedly, and this is further backed up by this research: instituting a kill policy is not a solution. It’s not an ethical solution, and really just doesn’t work to solve anything, other than ensure some rabbit killing business makes a continuous profit.

Please take a moment to remind UVic’s decision-makers that what they’re planning has been done before, and fails. It will be an endless, bloody process as rabbits will continue to move in, no matter how many UVic kills.

Further, is UVic planning to kill deer, hawks, falcons, or other wildlife that find their way to the campus? Tell UVic that they need to respect animals, and live in harmony with them, not dominate and murder them because they’ve crossed some imaginary borderline.

Peaceful steps can be taken to prevent an overpopulation, including instituting a TNR (Trap, Neuther/Spay, Return) program, which thanks to volunteers from local veterinarians, would actually cost less than the thousands of dollars UVic would have to spend per rabbit killed.

Direct your letters to:

Thank you for speaking up for the UVic rabbits. 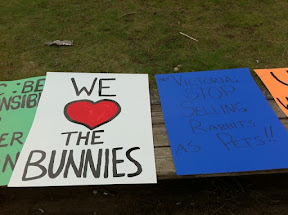 A group of over 50 enthusiastic people gathered in front of the UVic Student Union Building to join in the UVic Friends of Animals Club protest demanding UVic end all future plans to kill the rabbits at the University. Less than two dozen are estimated to remain on campus, and UVic’s intolerance to this population is disheartening.

UVic had changed their minds once again, and now declared that the grounds will be a ‘rabbit free zone’ after the end of the month. Plans are to capture and kill any rabbits found. Note and important distinction: UVic (and sometimes even the SPCA) may use the term ‘euthanize’, but you cannot euthanize a healthy animal; it’s a term used to describe the mercy killing of a terminally ill animal, including humans.

What's so difficult about tolerating a small group of rabbits living on campus to eat some of the grass? UVic argues that allowing any rabbits to live on campus means that people will drop off unwanted rabbits..and by declaring UVic 'rabbit-free', people will stop.

Well, most people already believe that UVic culls rabbits (which they haven't, at least until last summer according to FoI reports.) So that argument is decidedly baseless. Has UVic considered the impact on local raptors? There are hawks, falcons and owls that live on campus, and they depend on rabbits for meals. What will happen to the biodiversity of the campus? Has an environmental and ecological impact assessment been done? Wouldn't they have to be accountable for this massive change in life on the ground? Also, given the bunnies grass-cutting skills, does this mean we can expect the University to contribute more greenhouse emissions from running more tractors? This ill-considered decision will impact animals near and far. 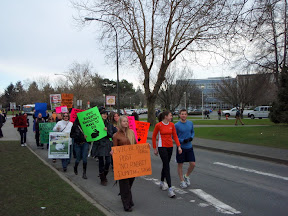 The event began with a short speech, explaining the situation, and then the March rolled out. We filled up a lane on Ring Road, and displayed numerous signs with pro-rabbit slogans. In front of the administration building, we hollered and chanted for a few minutes, to ensure they knew we were there. Chants included ‘Hey hey! Ho ho! Elmer Fudd has got to go!’ and ‘1 2 3 4 5, Let The Bunnies Live Their Lives’.

The procession carried all the way around Ring Road, picking up more supporters, and many vehicles honking in support. We also made a detour around the library, where a number of students were gathered. We rallied them to show their support.

We wrapped it up back in front of the SUB after over 40mins of marching, people wondering if we can do this again, and what else that can be done. For now, more emails can be directed to University of Victoria President Dave Turpin dturpin@uvic.ca, and UVic Facilities Manager Tom Smith tomfmgt@uvic.ca. These two are the ones making the decisions.

Letters in support of the remaining UVic rabbits can also be written to local papers. First priority is to demand UVic scrap any and all rabbit-killing policies. After that, several steps can be taken to resolve whatever issues UVic has with their feral residents, such as posting signs around the campus explaining that abandoning rabbits is harmful to the rabbits, and they should be instead taken to shelters, like the SPCA. Please also highlight that Victoria should ban the sale of pet rabbits. These two steps would go a long way to eliminating a further growth explosion. 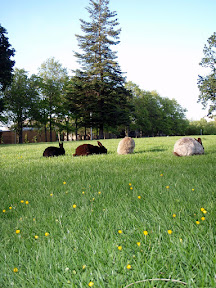 If UVic decides that rabbits can remain on campus, then a TNR (Trap, Neuter/spay, Return) program needs to be started. Local vets have volunteered their services, which would be the most expensive aspect. Currently UVic spends thousands per rabbit to kill each one, and instead could save this money and direct a fraction to managing a small program.

These simple steps would alleviate UVic’s frustrations, and ensure a safer and healthy environment for remaining rabbits, and help prevent future rabbits from being dropped off. Maybe UVic will be rabbit-free one day, but it shouldn’t be because we’re killing them.

A big thank-you goes out to Diana and Meghan for putting a ton of time into making this event happen. Also to the rest of the UVic Friends of Animals Club for organizing, painting signs and promoting the event.

Also, there is an ongoing fundraiser in Victoria for the rabbits bound for a Texas sanctuary, check out the Creatures Great and Small art exhibition and sale, which goes until Feb 20th at The Well at 821 Fort St.

Here is some media relating to the event:

* Our photo album of the event: https://picasaweb.google.com/foa.victoria/2011FreedomMarchForUVicRabbits

* UVic Should Be Rabbit Free By End of February, Times Colonist http://www.timescolonist.com/technology/UVic+should+rabbit+free+February/4254772/story.html

Here's the A Channel report on the demonstration:

Thanks for speaking up for the UVic rabbits!!

UPDATE: The city in Texas where most of the rabbits have been relocated to is planning to limit the number of rabbits people can have, which could affect the UVic bunnies at the Wild Rose Sanctuary, please sign this petition to help out: http://www.thepetitionsite.com/1/canada-us-uvic-rabbit-rescue-threatened-by-whitehouse-texas/

UPDATE 2: Here's the photo from the Feb 16th Saanich News: 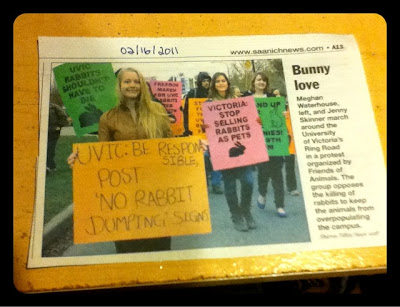 Tomorrow is our big event for the UVic bunnies, we're hopeful for a large turnout! Below is our media release, the Facebook event page is here:


The UVic Friends of Animals Club Has organized a protest to speak up for and defend the UVic Rabbits. We’re expecting hundreds of students and members of the community to join our march around Ring Road. The event begins at the SUB () on Wednesday, February 9th at 3pm.
We’re demanding UVic put an end to their savage plans to kill the remaining rabbits – it’s understandable that UVic wouldn’t want people abandoning rabbits on campus, but this isn’t how the situation needs to be handled.
We’re asking that the few remaining rabbits (probably under 30 based on such few sightings) remain on campus, and UVic should take responsibility after decades of neglect by organizing a TNR program (Trap, Neuter, Return; local vets have volunteered to help), and post signs around campus explaining that people shouldn’t abandon rabbits, instead taking them to the local SPCA.
Further, we’re hoping the City of will follow through on a proposal to ban the sale of pet rabbits.
All these steps would result in a peaceful and long-term resolution to the matter, a permanent reduction in population and allow the remaining rabbits to live out their lives with minimal impact, leaving them in relative peace on familiar grounds amongst their own communities. UVic clearly needs to learn to respect animals, not destroy them.
We fear that if they succeed with their rabbit-killing policy, who will be next in their bulls eye? The local deer? UVic should be setting a peaceful and respectful example, not portraying the mentality of someone like Elmer Fudd.
Please contact me if you have any questions, I will be available at the event as well.
Dave Shishkoff
Canadian Correspondent
Friends of Animals
Web Site: http://FriendsofAnimals.org
Victoria: http://TheVictoriaVegan.com
Facebook: http://www.facebook.com/group.php?gid=2496490922
Twitter: http://Twitter.com/FoA_Victoria
FoA Vegan Starter Guide PDF: http://bit.ly/foa-vsg
Posted by Dave Shishkoff, Friends of Animals at 3:21 PM No comments: