Event Report: Save Our Seals Sprint

It was a grey, cool day, one I'm sure seals could appreciate for the 'Save Our Seals Sprint' 5km fun walk/run, co-organized by Friends of Animals and OrganicAthlete Victoria.

The event is modeled slightly after a 'zombie run', where runners are 'humans', and out on the course are 'zombies'. In this case, our runners are seals, and out on the course we had a couple seal 'clubbers', who would chase and harass the seals as they were out for a 5 kilometer 'swim' around the scenic paths along Dallas Road to raise awareness about the awful seal slaughter on the East Coast that occurs this time of the year each year.

We had 7 walkers (thanks for coming out Steph, Sara, Kelly, Donald, Todd, Dee Dee and Linda), and 10 runners (listed below in the results). There were also at least five dogs out as well! Each participant also received a 'Save Our Seals' event headband: 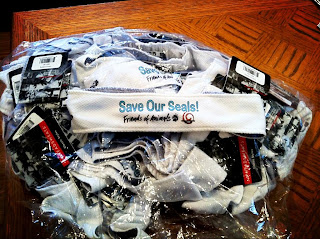 Just after 11am we sent the walkers off, and kept the runners back until 11:15 (so all would arrive much closer to the same time for the draw prizes.)

Out on the course were volunteers Al and Jason, who would chase and yell at the seals, holding signs like 'WEAR SEAL FUR' and 'WE HATE SEALS'. They were piloting the SS Harper and SS Hakapik.

Back at the table, I actually had people stopping by, to let me know that there were 'protesters' out there, yelling at our runners - hilarious! 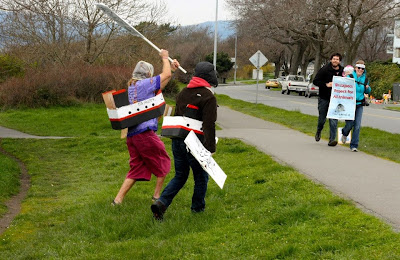 The walkers also carried signs, and were often stopped along the course to talk to other walkers about seals. 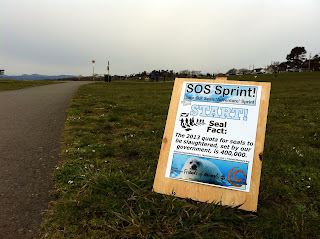 We also had 9 'course marker' signs along the route, with facts about the seal slaughter.

Our runner finishing times are: 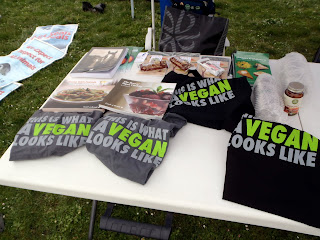 Next up were the prizes, we had over $500 in prizes (see here) - a huge thank-you to Lysanne Lavigne of Equinox Health Clinic, who offered all entrants $20 off a massage. A big thank-you to all of our other supporters who contributed prizes: Vancouver Island Paragliding, Purica, Green Cuisine, Sarah's Place and the Victoria Vegan Festival Society. There were just the right number of prizes, as all participants and volunteers left with something in hand. Another thank you to Al and Jason for being our 'clubbers', a big thank you to Ailsa and Carolyn for helping set up, and another thank you to Lysanne, Todd and Diane for helping take everything down (and Todd for the photos!)

Click here to enjoy the full gallery of photos, and below is one last shot, thanks to Chris, of a seal on a rock who was hanging out near the turn-around point on the course! 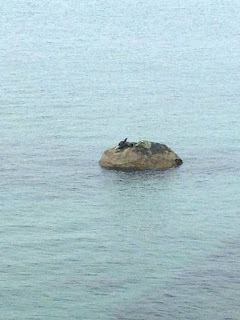 Hopefully we won't have to do this next year, and the seal slaughter will have ground to a halt, but we'll be back if we have to!

Event: Save Our Seals Sprint!

The SOS Sprint is a fun, 5k run or walk, inspired by ‘Zombie Runs’ - where along the course you may encounter ‘zombies’, but given that you’re a ‘seal’, you’re going to want to watch out for the ‘seal clubbers’! 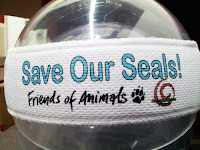 Participants all receive a ‘Save Our Seals’ event headband to identify them, and the ‘clubbers’ (hidden on the course to ambush seals for their fur!) will be easily identified, piloting their boats among the ‘ice floes’ searching for fleeing seals. Each year tens of thousands of seals are slaughtered off the coast of Newfoundland, and this event is to raise awareness and help bring an end this travesty.

The course is a scenic loop along the beautiful waterside pathways from Clover Point to just before the breakwater. Please arrive by 11am, parking on Dallas or at Clover Point. All are welcome, bring your kids and dogs!

$5-10 sliding scale entry (pay what you can), tons of prizes from OrganicAthlete Victoria and Friends of Animals supporters (distributed by draw). Prize list: https://docs.google.com/document/d/1mDpneSeIL8dqsCOz7wpORPAwtS-vBNzg8Tvq7lKubWc/edit?usp=sharing 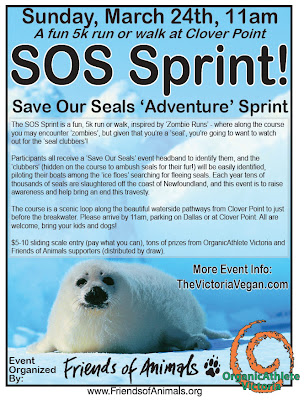 Hope you'll join us in speaking up for seals!!