Now that I'm in Vancouver (just for a couple years - yuck, I miss Victoria!), I'm involving myself in some of the local activism.

A current urgency is the dealings with the Vancouver Aquarium. They have plans to expand their facility, and opposition has increased significantly since the release of the documentary Blackfish, campaigns and groups like No Whales in Captivity have really picked up steam, including a protest I attended on May 24th that attracted dozens of activists outside the front gate of the Vancouver Aquarium:

The Vancouver Parks Board oversees aspects of the Vancouver Aquarium, including their plans for expansion, and on Saturday, June 26th held a public forum for aquarium representatives to present their case to continue, as well as hear from public Delegates, initially given 5 minutes each.

133 people signed up to present, which was unexpected by the Parks Board. We were informed that our time would be reduced to 3 minutes, due to the numbers.

The Aquarium reps took much longer than expected, and delegates didn't get to begin to present until nearly 4pm (and the day was planned to end at 5pm.)

Delegates #1 - #48 had opportunities to present on Saturday, although about half had left; waiting 6hrs+ was a very unfair and unreasonable expectation.

The majority of presentations from the pro-Aquarium crowd were shallow at best, and full of contempt for 'activists'. A number of times, they would start with 'I'm going to stick to the facts', but then tell stories about their dogs or children or other distractions. Emotional blackmail was a primary strategy: "what about the children?" Or "they can't learn about cetaceans without seeing them."

To which I would respond: how many days a year does a typical Vancouver child attend the Vancouver Aquarium? I would imagine less than one. Especially weighted over several years.

As for seeing dolphins or whales - I guess this explains why dinosaurs are so unpopular amongst children, and why the films about them have been such box office flops. /sarcasm

My own story is probably typical - I learned about animals through documentaries and reading. As a kid, I loved Lorne Green's New Wilderness, and could not get enough of 'Fact Books' on animals and nature. Despite almost no personal interactions with wildlife (especially captive), I grew up to become an animal advocate. My idea of protecting cetaceans involves opposing their captivity, and leaving other animals in the ocean alone by not eating them. I wonder how many Aquarium supporters have gone 20+ years without consuming a single sea animal, the capture of which disturbs wild cetacean activities, and compromises their environment and food supply? 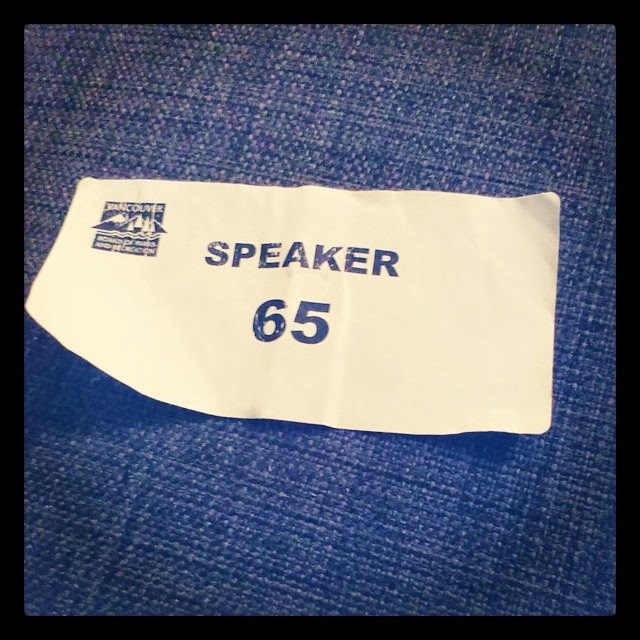 At the meeting, my sweetie Lesley and I waited for our opportunity to speak - we were right in the middle, with #64 & #65. The majority of Delegates on Saturday were opponents of captivity, and gave heartfelt and informative speeches in their reduced timeframes. The day went until 5:15pm, and Delegates were told they would continue Monday evening. (Not what people signed up for, but at least it wasn't just terminated.)

In defense of the Parks Board, they did ask good, critical questions of the Vancouver Aquarium proponents, who often flubbed their answers and were an embarrassment to their cause.

The meeting continued Monday at 6pm with Delegate #49. Of the remaining 85 people who signed up, less than half were evidently in attendance - likely unable to schedule more time for this. That night, the Parks Boardroom was full of unfamiliar faces, most of whom I did not recognize from Saturday. After a few presenters, it was clear the majority of them were pro-Aquarium (and affiliated with the Aquarium, as staff.)

I don't want to sound conspirational, but it seems suspicious to me that they knew they wouldn't have time to present on Saturday, and would instead have to attend a follow-up meeting - thus their lack of attendance on Saturday.

For your interest, here is my presentation:


I’m not a scientist, but an activist, and was disappointed that our positions were condescendingly dismissed by the panel. Most social progress has occurred because of activists. Many, including minorities, people of other ethnicities, sexualities and gender found their freedoms and rights not because of scientists, but activists. It’s a position of gross ignorance that denigrates and dismisses discussion because it’s ‘from activists’. Further, they’re activists as well. They’re advocating for the captivity of other species, and advocating for their own jobs.

The actual revelation of animal captivity is just how cruel people can be. We’re confining animals for our entertainment, and some call this ‘science’. These scientists are doing the field a disservice. Over and over on Saturday were remarks like ‘i’m going to talk about the facts’, but most of what we heard were stories. The facts were few and far between, which further weakens their position, and is intellectually dishonest and disrespectful of the process.

We must ask ‘who is this issue motivating?’ Yes, Vancouver Aquarium representatives and staff are here, but don’t forget most of them have an invested interest. Their animal testing at this facility pays their bills. The head of the aquarium reportedly earns $300,000. Historically, people who have no invested interest are better representatives of captives. Many volunteers who turned out are in opposition, and very few defenders from the public made the effort.

One of the only moving points i heard was that the Board committed to this expansion. Yes, they did, but don’t they also reserve the right to change their minds in light of new information, and a shift in public awareness? If the science proved undoubtedly these animals were suffering tremendously, wouldn't they want the opportunity to re-evaluate their position? We need much more than a juvenile ‘because you said so’.

Finally, the aquarium provides lazy research. If we want to learn about cetaceans and other species, we need to observe them in their own environment. Over and over, across a wide variety of species, including great apes, we’ve learned this. What we learn from captive animals is artificial, and primarily applies only to other captive animals. The Vancouver Aquarium is way behind the curve, and rejecting established scientific findings to defend activities here.

I’m opposed to the captivity and public display of animals in this prison. What i support is the rescue and rehab aspects, and the conversion of the facility to a non-public sanctuary with open-water pens. Please help move the facility in this direction.

We left after our presentations, which was about 7pm - it continued until after 10pm. This increased our total time investment to over 10hrs each...to speak for 3 minutes. Vancouver Parks Board: this was an unfair process.

You can read quick summaries of Monday's presentations from a pro-Aquarium website, as well as Richard Zussman from CBC (scroll down). Here's a short video news clip as well (with me in a cameo!)

Adding to the frustration, there is no opportunity for 'the other side' to have a similar presentation. There are plenty of scientists who oppose captivity, and argue that it's harmful to individual animals, and supports the breeding, trading and capture of them as well. There are many reasons for phasing out the public display of captive animals, and this should have been welcomed as well. The BC SPCA isn't even being consulted.

And this is where it gets worse.

Aquarium CEO John Nightingale is threatening to sue the Parks Board if they don't get their way.

Further, the Aquarium is planning to stack the Parks Board with their supporters, as an election is coming up, and three Parks Board commissioners are not planning to return to their position.

This is a pathetic and self-serving way to abuse a democratic process. Shame on the Vancouver Aquarium. This further exemplifies their corrupt and juvenile ideologies.

Please considering writing the Parks Board on this, and tell them you're alarmed by the plans of Aquarium advocates to stack the Parks Board with single-interest parties, giving them the freedom to do nearly anything they want, and potentially jeopardize all other park facilities. This is deeply disturbing. Perhaps there is something they can do to prevent this before the end of their term. Send your emails to: pbcomments@vancouver.ca - if you're not a Vancouver resident, please indicate it, as a potential tourist.

The list against the Vancouver Aquarium goes on and on. For example, their behaviour is pushing all the boundaries of what a non-profit is. They run like a business, with all the benefits of a non-profit, and continue to blackmail the public with emotional pleas like 'think of the animals'. Well, we are thinking of the animals, and the Vancouver Aquarium needs to refocus their energies on rescue and rehab, and get out of the business of displaying imprisoned animals.