A recent National Geographic Magazine features food, and feeding the predicted 9 billion people that are expected to be on planet Earth for 2050.

While lacking in conviction, Jonathan Foley does suggest eating less meat and animal products. Like the majority of writers wishing to remain popular, he doesn't push for eliminating what is a cruel, unnecessary and inefficient choice for food. It would be helpful for him to remind us that no human needs to consume animal products; and this message would go a long way to helping feed people, reduce greenhouse emissions and ecological destruction, and curb exploitative attitudes.

Here is an important and revealing graphic from the article; it's an impactful revelation of what we're doing to the planet with livestock:

According to this, 46.5% of the world's land remains undeveloped - a bit reassuring as I expected a much smaller percentage. This means the other 53.5% of all land on the planet has been developed - meaning people have altered the landscape for various purposes.

By and far, most land on Earth is utilized by agriculture. A staggering 38.6% of all land on the planet is devoted to raising livestock and growing crops. Most of it is for livestock. Foley puts it this way: "an area roughly the size of Africa" is how much land livestock occupies (and the area of South America for all crops.)

Just think about that a moment - if we were to raise all livestock in one place, it would fill up Africa. And a lot of the cropland is also used to feed livestock, increasing their total footprint.

Clearly, the solution to our problem is not more livestock. We just don't have the space for it.

Some might ask: is organic livestock a better option? Almost no one dares to breach this uncomfortable topic, but one of the 'perks' claimed by organic animal agribusiness is these animals are given significantly more space.

Given what we've just learned, space is one thing we don't have to spare. Organic practices demand even more land, further shrinking remaining habitat for wild species. It becomes a battle between livestock, and wild animals. I shudder to think how little space would be left were organic livestock practices to increase significantly. 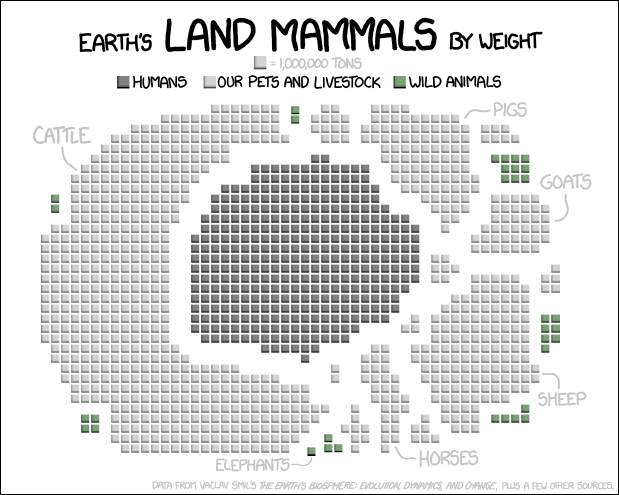 This is the mass of all land mammals on the planet. Humans are the dark blocks in the middle, livestock (cows, pigs, sheep) and pets are light grey, and a total of 35 of remaining blocks are wild mammals.

Once again, a tiny percentage of mammals (the green blocks) on land are wild. If you were to put all our goats on one side of a giant scale, and *every wild mammal* on the other side, goats would tip the scale.

What about hunting for meat? For me, this really puts into perspective the claim 'things would be better if everyone hunted!' If a majority of people switched to hunting, I expect nearly every remaining mammal would be killed in less than a week. (Where do we go from there?)

We really need to consider the the effects of livestock, and how we're going to feed imminent generations without ruining more of the planet.

No matter how you look at it, we need to change how we eat.

A couple more relative facts from the Nat Geo piece:
Be the change we need: go vegan, and get your family and friends to switch!