Earlier today I spotted this tweet from Lori, an article on Bryan Adams, who's sometimes described as vegan, playing at the Calgary Stampede. 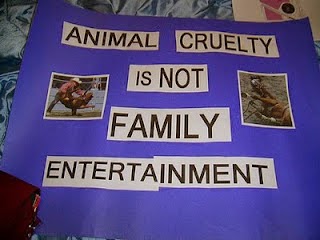 Disappointing to say the least, the rodeo is a monstrous event, torturing hundreds of animals for the entertainment of others. Not only is this a rodeo, but it's some kind of burger event.

Oddly, Adams is also in the news about his upcoming show in Newfoundland, who are calling him a hypocrite for playing there while they're out on the ice slaughtering seals. (Although it'd be fine if it was another time of the year?) To this, Adams is quoted as saying:

Last time I checked, it was OK in this country to have an opinion on what goes on in the world.

Either way, I’m coming to Newfoundland for my fans and to play music, not to get drawn into a debate with the seal killing industry.

However, for the record, I’m a veggie and against the deliberate killing of ALL animals, not just seals, so for those people that want to protest about my coming to play a gig, make sure to get all the chicken farmers, cow farmers and fishermen to march in unity at my presence.

Those are strong words we vegans can get behind...maybe it's not too late for him to back out of this show?