On Wednesday, February 22nd, I attended the CRD (Capital Regional District) meeting with discussion to start a program to deal with the 'deer issue' in Greater Victoria. Most of the time spent was from 17 presenters, who each had 5 minutes to speak, and this was followed by discussion from the CRD board.

Given the spin on the issue from the local media, I was expecting the four speakers representing Saanich farmers to be in favor of killing deer. Surprisingly, most did not give this impression, and some expressed similar sentiments to the advocates in marveling at their visitors. I cannot say that killing is off the table, but the impression is that they would prefer other solutions to the matter, which was refreshing and encouraging. 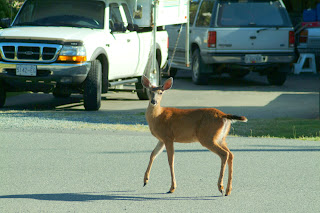 Our position (as Friends of Animals, and the Greater Victoria Deer Advocates) is that we need a Human Management Plan, and that we need to be pro-active, and take steps to make our homes less appealing to deer if we don't want them in our cities. Regardless of the level of acceptance, we need to treat them with respect, and recognize that they, too, are entitled to live, and that we have been reducing their habitat (certainly not the other way around.) We need to cultivate an attitude of respect and tolerance, and do away with the prevailing culture of domination and control.

Below are the highlights from my notes of each presenter, apologies in advance if I misrepresent any facts or statements, please use our comments section to clarify any matters, and discussion is welcome as well.

#1 - Wendy Fox, Saanich Peninsula Farmers
- farms cover 100's of acres, feel limited in what they can do
- farmers can kill up to 5 deer a year [??]
- we need to differentiate between rural and urban deer issues
- insists we need to get deer to manageable numbers
- deer need a major thinning
- farmers are losing $10,000's

#2 - Liz White, Animal Alliance
- there needs to be equal representation on the committee
- Ministry of Environment is pushing for killing as a 'solution'
- the CAG (Citizens Advisory Group) need to be revised, it's heavily biased against deer

#3 - Jordan Reichert, DeerSafe Victoria
- there doesn't appear to be any addressing of the loss of deer habitat
- no local population estimate actually exists, overall Island deer populations are diminishing
- we need to move away from a mechanistic approach, to a holistic one
- in the CRD proposal, "living with the deer" comes off as an off-hand suggestion, rather than a real possibility (other three areas of focus are on controlling deer populations.)
- "let's make the most of our inevitable relationship [with deer]"

#4 - Valerie ?
- we should lobby the Provincial Gov't for fencing, grants exist
- the cull would cost $500 per deer
- Island deer populations have dropped from 200,000 in 1980 to 50,000 at present [hope i got this right DS]
- human population is growing, and is the problem
- we're living on an island, little room elsewhere for deer 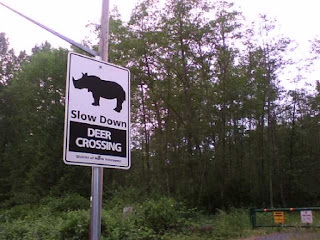 - fear of deer is CeRviDeaphobia 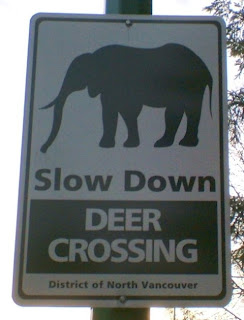 #10 - Larry Wartel
- read part of the script from Story of Stuff
- animals have nowhere to live, this conflict needs our focus

#11 - Mrs. Graham
- current methods (hazing, shot noises) inappropriate for most areas
- CRD website missing numerous submitted advocate letters, including hers and others she knows
- culling is not a solution, will result in growth spurt from plants, attracting yet more deer
- all new developments should be required to create wildlife corridors

#13 - Edith ? [#12 was speaking on another matter, #13 through 17 were late additions, so names not on meeting agenda copy i had DS]
- deer remind us to slow down, drive more reasonably
- deer are a joy for children
- fencing would pay for itself [in most cases very quickly]

#15 - Ryan Vantreight [Farms]
- farmers begging for action, need help
- geese are trouble as well
- today is about 'do we do something'

Following the Presentations/Delegations was CRD board discussion, here are my notes from this as well:

- fencing is not a solution, sometimes harms deer
- asked "what is the right number of deer"
- some areas more urgent than others, focus on "farms", then deal with "urban" issues.
- Mayor Dean Fortin asked to put this in scale, if this should be a priority at all, are there more important matters that are affecting the community more significantly than this
- FEEDING DEER IS ILLEGAL!!
- deer themselves are not "urban" or "rural"

I've come across two media reports on this:

Discussion is welcome below, or join the Friends of Animals group on Facebook, the Greater Victoria Deer Advocates: https://www.facebook.com/groups/133471023429190/

And finally, our information is also on our website: http://TheVictoriaVegan.com/foa