Follow-up On The Carriage Accident

It was a busy week on the carriage front, on Thursday we saw some more media, and coverage included this great clip from A Channel:

As well, there was a story from the Interior of 30 horses from a thoroughbred breeder's ranch who were destined for slaughter because he couldn't afford to keep them.

This exemplifies a core issue: the keeping, collecting and breeding of horses. Not unlike cats and dogs, horses are treated much the same, and the same over-population issues arise. Similarly, if the breeding were to stop, we'd see an end to all horse exploitation, including the carriages; as well as an end to these unfortunate situations where a horse is sent to a slaughterhouse (or a cat or dog 'put down'). Further, is this really just an ultimatum? Isn't the message here 'buy my horses or I'll send them to slaughter?' Feel free to discuss this, or post any of your thoughts in the comments section. 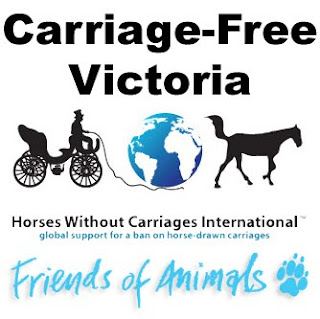 Also, Friends of Animals has started a Facebook page called Carriage-Free Victoria on this issue, join us here: http://www.facebook.com/pages/Carriage-Free-Victoria/142240729127464

Concluding last week's activities, our volunteers were out on Thursday and Friday, collecting signatures for our petition, handing out leaflets, and speaking to people who are concerned with our city's treatment of animals. Thanks to Sarah Kramer for joining us on Friday and bringing delicious cookies no less! Here's her report on the action including some photos.

Further, on Friday in the Times Colonist there was a piece on City Council reviewing animal bylaws, but there was no mention of the carriages, so we sent the following letter to Mayor Fortin and Councillor Thornton-Joe.

ACTION: please do take a moment to write them as well: mayor@victoria.ca and cthornton-joe@victoria.ca

Dear Mayor Dean Fortin and Councillor Charlayne Thornton-Joe,
Thank you for bringing animal bylaws to the forefront. Friends of Animals will support several of the proposed measures described by Bill Cleverley in the recent Times Colonist  piece, “Victoria to rein in animal care with review of control bylaw.” Notably, we see no mention of the horse-drawn carriages in the article, although they necessitate immediate action from the council. Horse-drawn vehicles should be banned from the streets of , as an accident last Monday shows: there is inherent danger, as well as an ethical problem, in having horses in ’s streets. It was dumb luck that no people were injured. In a stunning show of insensitivity, the carriage owner said Wes the horse would be back on the street working in a day or two -- after being dragged along by another horse attached to the carriage. What a horror show for visitors of to have to endure, and what terrible news for the international media to report about our city.
Nor are such scenes unusual when horses and traffic mingle.  A few weeks ago in , two carriage horses broke free, killed one person, and injured dozens, including children. In last year a horse was killed after being startled and breaking into traffic, and several more horses were injured over the summer. Right now they’re forced to pull tourists around in the heat wave, apparently oblivious to temperature regulations and basic standards of decent treatment.
would not be the first city to ban the carriages, and could be an example of enlightenment by ensuring the horses are places safely in sanctuaries. Effecting these changes would raise the status of , and ensure that neither horses nor people can be injured or killed in this ridiculous and antiquated shtick.
On behalf of the international advocacy group Friends of Animals, I request that you address this in your proceedings, and I would also like to know if there’s any way I or the public can participate.
Very truly yours,